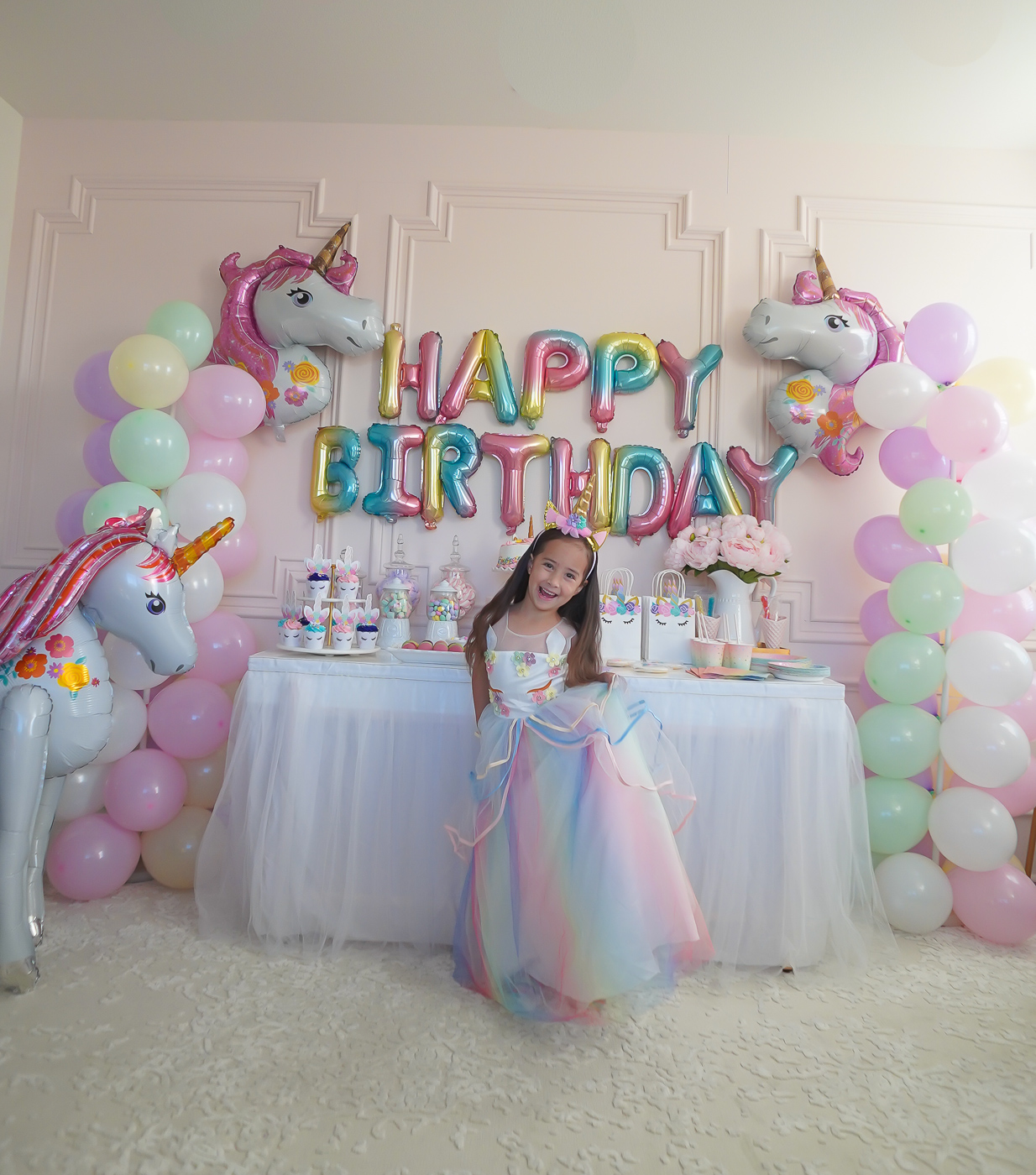 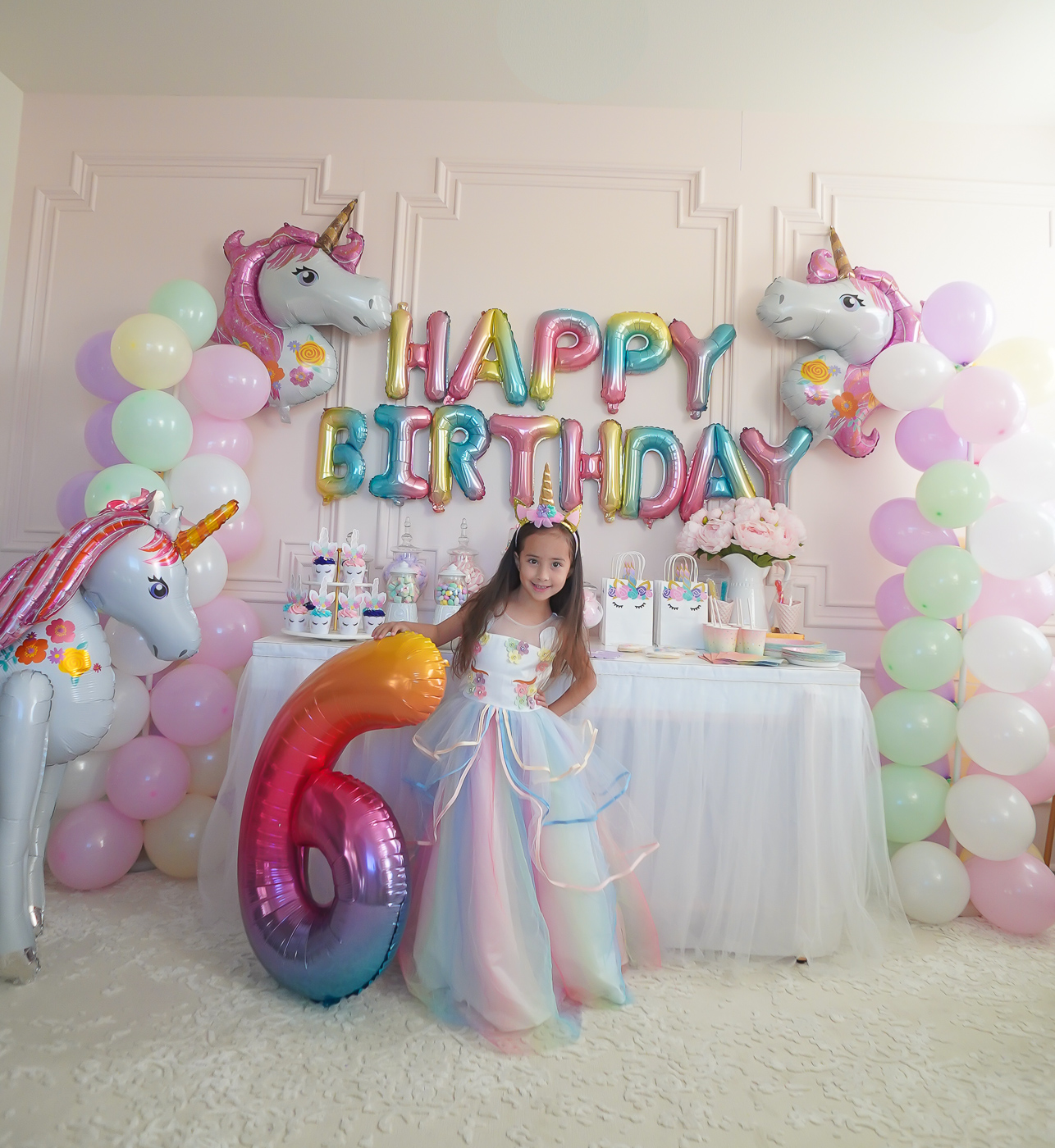 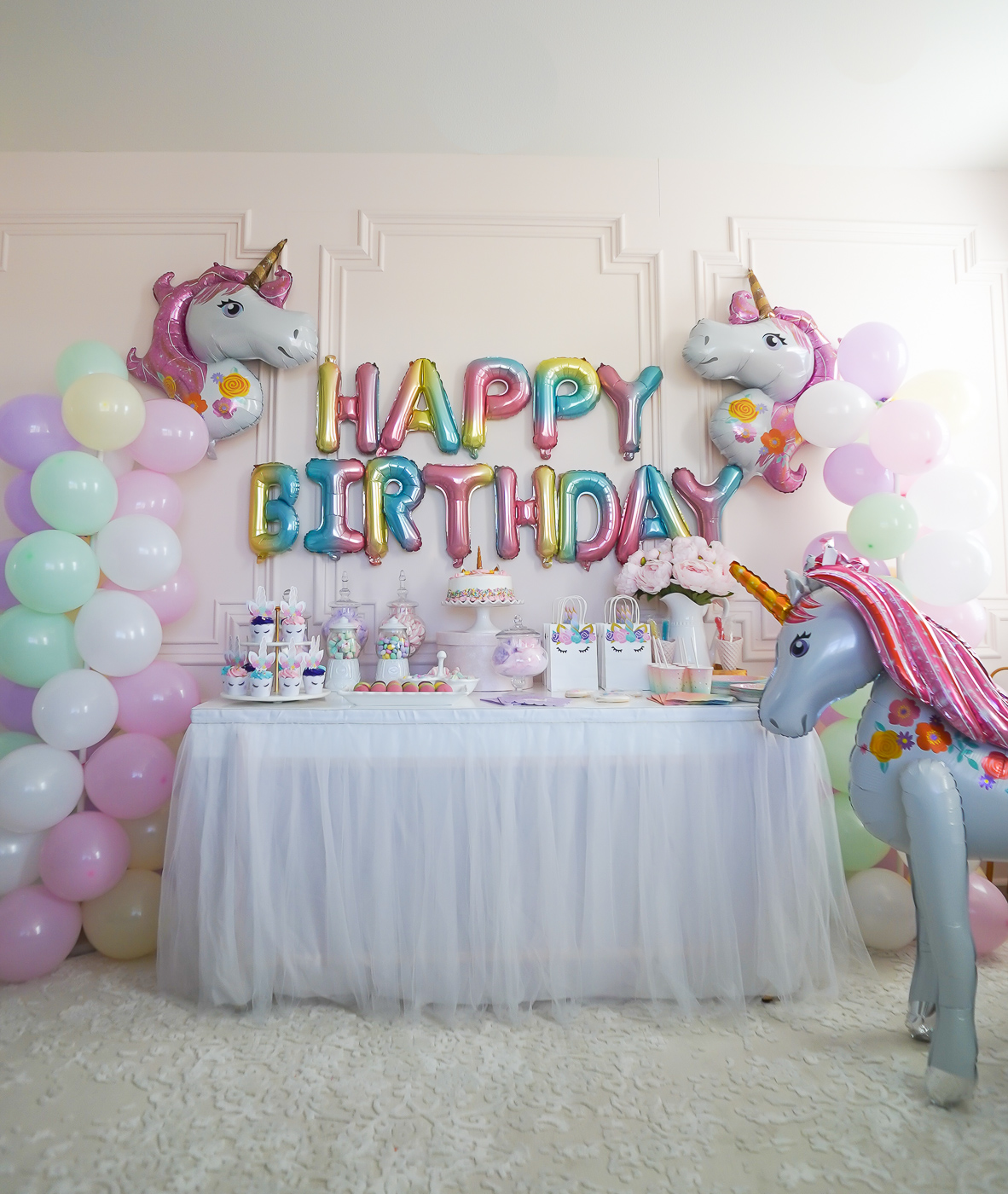 Can you even believe Milan is 6 years old?  Where has the time gone?  It seems like yesterday she was pretending to sip empty coffee cups and saying how beautiful the sunset is.  We can’t forget putting on crystal lite as deodorant!  This girl is something else.  My rainbow baby.  My first born.  Crazy that she is growing so fast and will be taller than me in no time.

I decided to make my own balloon garland/decor this year and save myself $500+!  The large self standing unicorn (also comes with the 2 matching 46″ unicorn heads) is under $18 for all THREE gigantic balloons.  One balloon company was going to charge me $80 just for the standing unicorn balloon! WTH. You blow it up yourself using the straw that’s provided and doesn’t require helium.  I used glue dots to stick both the unicorn heads on the wall.  Right there I saved myself a huge amount of money.

I debated paying $375 for a balloon garland but then figured that it’s such a waste of money.  I would rather put that money towards something special for Milan. She doesn’t care about balloon garlands.  It’s more for me and taking photos.  I decided instead of doing the typical garland (which I did one year and it was SO HARD because I didn’t have anything to secure the garland to due to the custom pink wall), I would do some columns and make the illusion of a garland using the two unicorn balloons and the Happy Birthday balloons.  To be honest, I did not have a clear picture in mind and had zero clue how this was going to turn out but I’m pretty pleased with how everything came together.  I saved a TON of money but it was worth the effort.

Luckily I found this balloon column stand kit for under $22.  It seemed easy enough and IT IS!  It just takes some time but not as much time as the normal garland kit.  The only thing I want to point out is the base.  It’s supposed to be filled with water to keep it grounded but after reading the reviews, I filled mine with tiny black beans and it worked fine.  I wouldn’t recommend this type of kit for outdoor birthday parties.  It will more than likely blow over easily.

My first column (on the left) turned out pretty well and I was able to make the diagonal effect with all the colors but by midnight, the second column was so hard to get right. I didn’t want to mess with it in fear of popping them and waking up the kids.  I had to do all this late at night because Meadow hasn’t been napping during the day (sleep regression/teething).  Had I had a little more time and wasn’t about to die of pure exhaustion, I would have done a much better job but oh well.  I used this macaroon kit HERE and didn’t even all of the balloons.  I’ll save them for another occasion.

All the candy, cookies and Italian macaroons were found at Home Goods.  I ordered the custom unicorn cake from Walmart for only $17 (3rd time ordering birthday cake from them and very pleased). I wanted to get the two tiered unicorn cake because it’s so much prettier but it would be so wasteful. and I also got a dozen custom cupcakes from Walmart for only $6.  I’ll be ordering this pastel rainbow unicorn cupcake cake for her birthday party with her classmates/friends at the end of the month.  Yes I have to do another birthday party for her friends.  Send help! Haha It’ll be held at a kids venue where they can jump around and wear themselves out.  Okay so I’m exhausted.  I can’t wait to show you what I got for Milan for her birthday – that will be the next post! 🙂